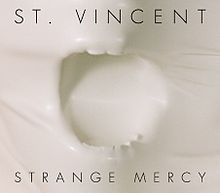 Strange Mercy is the third studio album by musician St. Vincent, released by 4AD on September 12, 2011, in the United Kingdom and a day later in the United States. The album’s cover art was designed by St. Vincent, and was photographed by Tina Tyrell. The album peaked at #19 on the Billboard 200, making it St. Vincent’s highest charting album yet, only to be surpassed by her next solo album, St. Vincent. In addition, Strange Mercy also received significant critical acclaim.