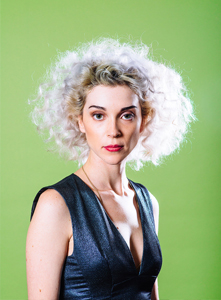 Anne Erin “Annie” Clark (born September 28, 1982), better known by her stage name St. Vincent, is an American musician, singer-songwriter, and multi-instrumentalist. She began her music career as a member of The Polyphonic Spree and was also part of Sufjan Stevens’s touring band before forming her own band in 2006. Clark currently resides in downtown Manhattan.

Her debut album was Marry Me (2007), followed by Actor (2009) and Strange Mercy (2011). She released a collaborative album with David Byrne in 2012 titled Love This Giant. Her fourth solo album, self-titled St. Vincent, was released on February 24, 2014. In February 2015, St. Vincent won her first Grammy in the Best Alternative Album category for St. Vincent.

The first, “Roslyn”, was in collaboration with Bon Iver and appeared on the 2009 film soundtrack of The Twilight Saga: New Moon. Her second contribution, “The Antidote”, was written for and appeared on The Twilight Saga: Breaking Dawn – Part 2 in 2012. Her track “The Strangers” was sampled by Kid Cudi on the song “MANIAC” for his 2010 album Man on the Moon II: The Legend of Mr. Rager. Clark also contributed backing vocals for Swans on their 2014 album, To Be Kind.