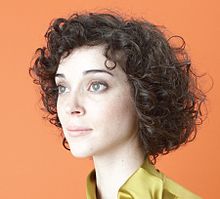 Actor is the second album by musician St. Vincent, released by 4AD on May 4, 2009, in the United Kingdom and a day later in the United States. The first single released was “Actor out of Work” that April. Annie Clark was influenced by scores to films by Disney and Woody Allen. To prevent writer’s block, Clark watched films without the sound and composed music for her favorite scenes. After arranging the music using GarageBand, she then wrote lyrics and added gentle vocal melodies.

The music video for “Actor out of Work” was premiered April 10, 2009 on Spinner. In it, Clark auditions a series of actors who begin sobbing in front of her. The video for “Laughing with a Mouth of Blood” features Clark with comedy duo ThunderAnt as owners of a feminist bookstore.